For patients in dire need of facial reconstructive surgeries, the advanced and detailed methods of repairing craniofacial anomalies and injuries can be life changing. But, what role has technology played in this transformation and how is it being used to treat patients in modern day operating theatres? Abi Millar reports.

n 2017, 21-year-old Katie Stubblefield made headlines when she became the youngest person in the US to receive a face transplant. The young woman had lost her face three years earlier following a self-inflicted gunshot wound and while she survived, her injuries were some of the worst her doctors had ever seen. Nearly her entire face was gone, including her nose, mouth and jaw, and she had a traumatic brain injury from the bullet’s force.

Until quite recently, a patient like Katie would have had little hope of looking normal again. The best she could have expected would have been to patch up her injuries – and indeed, Katie lived for three years with a makeshift face that she compared to Shrek. Surgeons closed her wound with tissue from her own thigh and Achilles tendon, and gave her a titanium jawbone. She had multiple surgeries to stabilise her condition and remove shattered bone.

While this in itself was a technical triumph, Katie’s eventual face transplant represented the very acme of what surgery can achieve. Since 2005, when French doctors conducted the first partial face transplant, the field has advanced rapidly, and there have now been around 40 surgeries worldwide. However, because these are not life-saving surgeries (unlike, say, a heart transplant), ethics committees often block them from going ahead.

The most extensive face transplant ever attempted

The Cleveland Clinic, Ohio, which performed Katie’s surgery, is one of the pioneers in the field. It conducted the first US face transplant in 2008, followed by a second in 2014. Katie’s transplant, its third, was also the most extensive ever attempted. Her facial tissue was replaced in its entirety, including her scalp, forehead, eyelids, eye sockets, upper cheeks, nose, teeth, facial muscles and jaw.

It would be an understatement to call this surgery challenging. The procedure took 31 hours and involved 40 people in two operating rooms. As Dr Brian Gastman, Katie’s primary plastic surgeon, explains, removing the face from the donor is a delicate operation in its own right.

“First of all you have two human beings – the donor who is legally dead still has all the complexities of any human being,” he says. “You can’t just go in with a knife and take the face off, you have to go in and dissect that tapestry of tissues – teasing it out and separating it so it’ll stay functional when it’s transferred to the recipient. And you have to do this with the recipient, which is much harder.”

Beyond that, a surgery of this nature is highly multidisciplinary, involving everyone from rheumatologists to bioethicists.

“You name a speciality, we probably need to get them involved, and all these teams need to work together in sync,” says Gastman. “This is a team of teams that goes beyond the technical aspects of the surgery.” 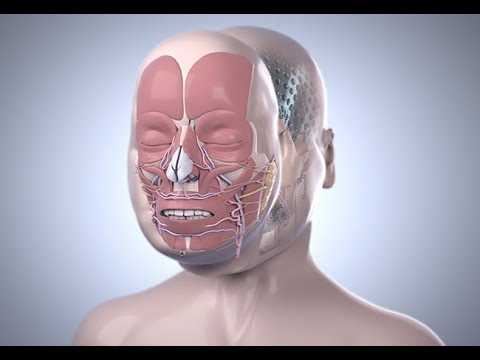 From a technical perspective, Katie’s surgery was a step beyond what had come before. Prior to the operation itself, surgeons used an array of preoperative planning techniques, including the augmented reality headset HoloLens. They also used 3D modelling to rebuild Katie’s jaw.

“With augmented reality, we can say we’re going to cut here and here on the patient and then move the tissues with our fingers in the air, and see whether that’s the right position,” says Gastman. “Those are the kinds of things we can do without needing to have a physical model in our hand. We can also do a lot more modelling on a computer and try to build these ideas in advance.”

Despite these advances one major roadblock remains - the possibility of rejection. Katie will remain on immunosuppressive drugs for the rest of her life, which increases her risk of developing infections or even cancer.

How bioengineering is moving the field forward

Another potential gamechanger within this field is bioengineering – specifically reconstructing the face from the patient’s own tissues. In its best-established form, this involves taking tissue from the thigh or abdomen and moving it to the head or neck. While that approach has risks (such as problems with the muscles in that area), tissue rejection isn’t one of them.

These days, it is becoming possible to use this approach not just for skin grafts, but also for facial implants, providing a viable replacement for plastic or metal.

“I work with a company that takes fat out of the patient’s body. Within our fat are fat-derived stem cells, which can be converted to become any type of tissue you want including bone,” says Gastman. “So, if I tell them I’m missing this shape of bone in this patient they can take a computer, design the area that’s missing and create a soluble bioscaffold. They take the patients’ stem cells out of their fat, convert it to bone in the scaffold, and now I have that patient’s cells as bone shaped exactly to the defect that’s missing.”

Within a few weeks, this tissue-based implant will develop its own blood supply, meaning it is better able to resist bacterial infection.

Professor Jonathan Knowles, professor of biomaterials science at University College London, is the principal investigator on a project by RAFT, called ‘3D printing for facial reconstruction’. His team are working on a biodegradable structural implant to improve the success rate of face, head and neck reconstruction surgeries.

“The current technologies tend to rely on metals, which is not ideal because they’re obviously a permanent implant rather than a temporary one,” he says. “We’re trying to develop an alternative to that which is a degradable material that can be implanted.”

The implant will create a scaffold that encourages the patient’s own bone to grow into the right position. As the bone grows, the scaffold will be absorbed, leaving the healthy bone behind.

“We’ve tried to synthesise some materials that have very high strength and low toxicity, and that can be 3D printed very quickly,” says Knowles. “This gives us the possibility of being able to print on demand and implant them fairly rapidly. The method we’re using also offers the potential for very high resolution of the print in the final object.”

He is now looking for industrial partners to move the technology into the clinical testing phase, and anticipates it could be used on patients in the next three to five years. He believes this will be part of a larger wave of improvements in materials design and materials chemistry.

Gastman thinks that the next advances in facial reconstruction surgery could well be linked to advances elsewhere. And he hopes that the successful outcome of Katie’s surgery will soon prompt private insurers to cover these procedures (which to date have been supported by the US Department of Defense).

“The world of face transplantation connects to liver, lung and heart transplants and vice versa, so it may not be in our area where we make the discoveries,” he says. “There are advances going on all the time for patients with a variety of maladies. We will take patients’ tissues, convert them into whatever we want them to be, and re-implant them into the patient to give aesthetics, form and function that we couldn’t before.”